The studio behind the typeface and masthead for the magazine spill on Frank Ocean’s working process, his absolute perfectionism and how not even they knew when it would drop

There were several hopeful moments in the recent lead up to its unveiling. Predictions were made, potential collaborators had their every move in relation to Ocean dissected, images were allegedly leaked and hundreds of articles flooded the timelines speculating about the time of its arrival.

Visual album Endless dropped on Friday and Blonde followed two days later, along with the announcement of the magazine Boys Don’t Cry, featuring three covers. People scrambled for a copy before quickly realising that if you didn’t make it through one of the four global pop-up shops in 0.33423 of a millisecond then you were likely to find yourself sobbing into an eBay search bar as you blinked at prices soaring up into hundreds of dollars for the quickly sold out mag. Even Frank Ocean’s mum tweeted that people should chill.

Don't Pay those ridiculous prices for the mags on eBay. Just hang tight a sec..

The first glimpse fans had of Boys Don’t Cry was its distorted, capitalised font printed across a silver, sealed foil package. It was also the first glimpse that Zak Group, the London design studio behind the typography had of the magazine that they’d worked so hard on.

Catching Ocean’s attention through their work with the Berlin Biennale and Taipei Biennial, as well as books for Cosey Fanni Tutti and David Greene, Zak Group became involved in the project in late 2014. After finally reaching the end of an almost two-year design journey, of which they tell us Frank was incredibly involved in, the studio’s founders Zak Kyes and Grégory Ambos filled us in on what it was like to work with the elusive Ocean – or at least, they warn, as much as they were at liberty to tell us. 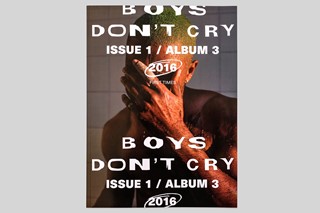 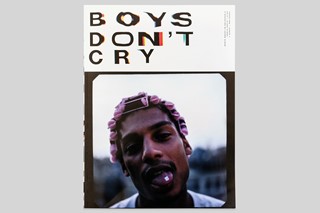 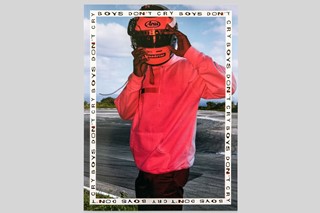 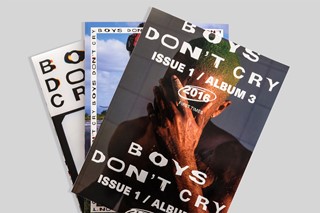 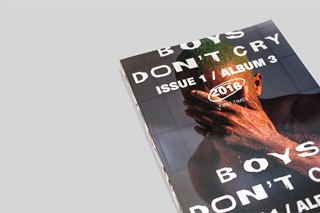 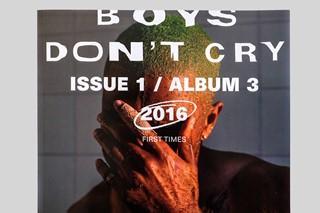 How did this come about?

Zak Kyes and Grégory Ambos: Our collaboration with Frank Ocean and his creative director Thomas Mastorakos began about a year and a half ago. We received a call from Wendi Morris, Ocean’s project manager, saying that Ocean would like to meet to discuss a new project with us. After several scheduling attempts a meeting was arranged at Abbey Road Studios. We presented some of the studio's recent and current projects. Both Ocean and Mastorakos have a deep visual and cultural awareness and knew of many of Zak Group’s projects and some of our collaborators – including the curator Hans Ulrich Obrist in particular.

What was the initial brief you received?

Zak Kyes and Grégory Ambos: The brief evolved constantly, until the last moment, so there is no single answer to give. It would be more accurate to say that Ocean and Mastorakos communicated an atmosphere or a feeling and as designers we provided the visual sensibility.

Can you tell us about that atmosphere and feeling?

Zak Kyes and Grégory Ambos: We were shown much of the content as it was being produced, so this provided an atmosphere that ranged from conversational to more personal visual references.

Were you both Frank fans before this came about? Or what was your level of knowledge of Frank?

Zak Kyes and Grégory Ambos: Yes, we first discovered Ocean a few years ago when he was still involved with Odd Future.

Why do you think Frank was drawn to work with Zak Group?

Zak Kyes and Grégory Ambos: Ocean was particularly interested in the identities we designed for the Berlin Biennale and the Taipei Biennial. To our surprise, he owned several of the art and architecture books that we designed – like the Serpentine Gallery Manifesto Marathon and books for the artist Cosey Fanni Tutti and the legendary architect David Greene of Archigram.

As a studio we create design and art direction for clients that understand the power of design. Most often we work with cultural institutions like our current collaboration with M+, the new museum of visual culture opening in Hong Kong in 2019. Other recent projects include the full rebranding of the French fashion house Paco Rabanne.

“Ocean surrounds himself with extremely talented people who provide multiple inputs. He is the central nervous system in this constellation and in our experience things were only finished once they were perfect” – Zak Kyes and Grégory Ambos

Zak Kyes and Grégory Ambos: The type is a hand-distorted version of the sans serif typeface Union designed by our collaborator Radim Peško. The typography was made by scanning originals on a large-format scanner. The distortions were then created by moving the original typography while the lamp moves across the bed of the scanner. In the studio we called it the BDC treatment.

The technique of printing, capturing and manipulating original artwork also references contemporary artists like Wade Guyton, historical works by Bob Cobbing or experiments made in the late 60s with the then-new photocopy technology. A great example of this is The Xerox Book (1968) published by Seth Siegelaub, which is a favourite of ours.

Only after the album was released did we notice that our capture and distortion technique resonates with “chopped and screwed” mode of editing present in the first single “Nikes” and Wolfgang Tillmans’ voice-over intro to Endless: “Blurring, blurring the line between still and motion / With this Apple device”.

How much input was given from Frank himself?

Zak Kyes and Grégory Ambos: Ocean is very hands on – and has a precise vision – which made it a very exciting collaboration to be part of. Feedback came from him directly or via Mastorakos.

Can you give us some insight and details into Frank’s artistic process?

Zak Kyes and Grégory Ambos: Ocean surrounds himself with extremely talented people who provide multiple inputs. He is the central nervous system in this constellation and in our experience things were only finished once they were perfect.

Frank visited your studio for the first time last August – can you tell us about that?

Zak Kyes and Grégory Ambos: For us, design is an iterative – rather than a linear process – which begins with sketches and continues until all the possibilities are exhausted. Usually, we then step back and make a selection which becomes the starting point for a conversation. The Boys Don’t Cry project was different in that Ocean, Mastorakos and friends stopped by the studio last August when we were in the midst of this process. This turned into an intense weekend of experimentation with the entire team at the studio where the look and feel was established and then later refined nearly a year later.

“Ocean is creating a kind of gesamtkunstwerk in which film, photography, music, publishing – and timing – are all intertwined” – Zak Kyes and Grégory Ambos

Why do you think it took so long to be refined?

Zak Kyes and Grégory Ambos: Perhaps it has to do with just taking the time to get things right. Two albums, a video, and the editorial project Boys Don't Cry were released at the same time. That takes time.

You mention you were surprised when this came out – as a lot of people were. Did you ever think it would actually happen?

Zak Kyes and Grégory Ambos: We knew it would happen – but we did not know when, or the extent that our work would be used. I think we were in the same position as a lot of people – like Wolfgang Tillmans who only found out that his track was used in its entirety when the album came out.

What do you think this drawn out process of creating something means in an industry that sees us so quickly consume and dispose of art and music?

Zak Kyes and Grégory Ambos: Ocean is creating a kind of gesamtkunstwerk in which film, photography, music, publishing – and timing – are all intertwined. When you see the project as a whole the depth of it is pretty remarkable. We have a huge amount of respect for him.