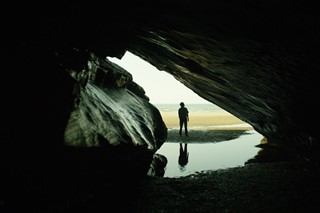 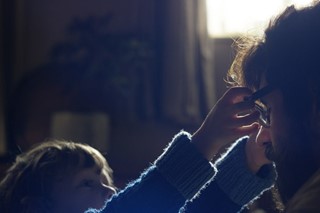 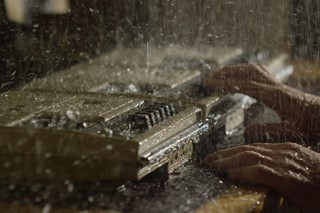 It’s rare for films to depict blindness with thoughtful consideration, let alone apply a 360-degree interactive experience. Comprising of two parts, Notes on Blindness is an innovative project inspired by the audio diaries of John Hull, an author who recorded private musings and philosophical breakthroughs upon losing his eyesight in the 1980s. The feature-length documentary is a poetic meditation on how blindness shapes the mindset, and along with it is Notes on Blindness: Into Darkness, an accompanying VR film which transports the user to a new dimension.

In the main 90-minute feature, actors lip-sync to John’s cassettes in a lyrical manner reminiscent of Clio Barnard’s The Arbor. Meanwhile, the visuals reflect a strange sensation: the stimulants of an outside world are denied, and thus John’s brain turns inwards. His physical recollections of family members slip away, but childhood memories reappear with crisper colours. When dreaming, he still sees clearly and conjures up vivid fantasies, but upon waking up, it’s like turning blind every morning.

Narrated by the same recordings, the virtual reality component places whoever’s wearing the headset into John’s shoes. The animated environment starts in total darkness, but steadily a landscape is formed by recognising sounds such as rainfall or chatty strangers. Not only do you forget there’s fancy equipment strapped to your head, it’s also kinda trippy to look down at yourself and briefly forget you exist. To find out more, we spoke to Peter Middleton and James Spinney, the two directors of Notes on Blindness.

Notes on Blindness started off with a few shorts, and now you have a full-length feature with a VR accompaniment. How did the project evolve over the six years of development?

Peter Middleton: We came across John Hull’s book Touching the Rock six years ago, which is his first-hand account of blindness. We were immediately struck by the depth and precision with which John was able to articulate that experience – it charted his adjustment to blindness and eventual discovery of “a world beyond sight”.

The foreword of the book mentioned it’s based on these audio cassettes that were about 16 hours’ worth of material. From an early stage, we knew it had the potential to make a long-form project. So we began taking passages from the archive and made a series of short films to help demonstrate our style and approach, which then paved the way for the feature.

How would you describe your aim with the visuals of the documentary?

Peter Middleton: In terms of the film, we worked very closely with our cinematographer Gerry Floyd to develop an aesthetic that attempts to evoke something of the interiority of John’s experience. It’s an account that sets so much in memory, in dreams and in John’s imagination. We were conscious that conventional documentary approaches weren’t best-suited for this. We knew from an early stage we didn’t want to use talking heads or observational filming.

James Spinney: This led us to develop a visual style of restricting the frame: using longer lenses, avoiding wide establishing shots, and framing out the supporting characters’ eyes to suggest the loss of eye contact.

“For us, the distinctive feature of VR is its ability to suggest an alternate conscious experience.” – James Spinney

What did you want the VR to accomplish that the documentary couldn’t?

Peter Middleton: We see the film and VR as complementary experiences. The VR experience is a very different treatment of John’s audio recordings. It uses binaural audio tethered to 3D animation, which tries to find a visual analogy for acoustic experience. There are six chapters in total, particularly focusing on John’s sensory and perceptive experience of blindness – especially how the intricate patterns of falling rain can give shape and definition to the environment; the panorama of sounds in a park; how thunder can put a roof over your head; how wind in the trees bring trees back into existence.

James Spinney: The most successful virtual reality projects we’ve seen will build on what makes VR a distinctive medium, rather than mimicking the conventions of cinema. And for us, the distinctive feature of VR is its ability to suggest an alternate conscious experience.

Is VR the future of cinema? Or is it more for one-offs like Notes on Blindness?

Peter Middleton: There’s a really interesting debate going on about this. VR has only surfaced in the last few years as something accessible to the public. It definitely affords opportunities within storytelling, but many of its most innovative expressions are away from filmmaking: in science, medicine and obviously gaming.

James Spinney: Especially because there’s no established grammar for how you tell stories in virtual reality, which is what makes it an exciting time for the medium. Interestingly, the most powerful things we’ve seen in virtual reality have been non-fiction pieces that have strong first-person voices at the centre.

There’s also a smartphone app for the film?

James Spinney: Yes, it’s been important to us from the beginning that the film is accessible and inclusive for all audiences. One of the ways that blind and partially sighted audiences experience cinema is through audio description, but that unfortunately isn’t available in all cinemas. So we’ve partnered with the RNIB for an app called MovieReading, which works on your smartphone. Wherever you’re watching the film, you can access the audio-described version of the film. It works like Shazam in how it picks up the sound, and through headphones you can access it.

We’ve also been working on an enhanced soundtrack. Rather than having an external narrator as in conventional audio description, we’ve re-edited the soundtrack to the film, building in additional narration from John and Marilyn Hull, and keeping the narration in first person. We’ve reworked the sound design and music so that it works as a coherent 90-minute sound experience – even without a picture.

Do you think other films could follow your lead in putting more care into the accessibility?

James Spinney: A big problem with accessibility in cinema is it’s often an afterthought in the process. It’s tacked on after the film’s completed, rather than being part of the creative process. Throughout the postproduction, we’ve tried to think about ways to make the film more accessible. So the enhanced soundtrack was developed in collaboration with our editor Jules Quantrill and sound designer Joakim Sundström. It’s an approach that could be easily incorporated into documentary projects where you’re working with interviews or archives; or by recording additional audio material with actors on fiction projects

Peter Middleton: A lot of it is about starting a conversation about different ways audiences can experience film, and thinking about creative ways that cinema can be more inclusive.

Notes on Blindness comes out on July 1