After igniting fierce debate with her pop-culture polemic, The Hunger Games actress Amandla Stenberg has emerged as one of the most incendiary voices of her generation – but she insists that her fight has only just begun

Taken from the Autumn 2015 issue of Dazed:

This spring, an LA teenager’s school project ignited the internet. A charm offensive titled “Don’t Cash Crop My Cornrows”, the five-minute video deftly unpacked the thorny issue of cultural appropriation with a nuance that few would be able to nail. Raising an eyebrow at culprits like Iggy Azalea and Katy Perry treating black culture as a pick’n’mix stand at the multiplex, the clip, uploaded by 16-year-old Amandla Stenberg, announced a whip-smart new voice that was not to be fucked with.

Three years after she shot to global prominence as Rue in The Hunger Games (2012), the actress is leading a wave of young, hyper-informed trendsetters with a fresh and fearless take on today’s defining issues. Last month, she echoed the sentiments of her school project in a comment on Kylie Jenner’s Instagram. In response to the pouty reality princess’s latest look – cornrows – Stenberg wrote, “when u appropriate black features and culture but fail to use ur position of power to help black Americans by directing attention towards ur wigs instead of police brutality or racism”. Jenner retorted, “go and hang out w Jaden.” (Stenberg attended prom with Jenner’s ex, Jaden Smith.)

Yet Stenberg cuts through the noise. Using social platforms like Tumblr and Twitter, she’s always set her own agenda in terms of what’s important and newsworthy, regardless of what mainstream media is championing. She uses Instagram, but not just for thirst trap selfies or to promote her personal brand. More than anything else, she’s someone who refuses to stay quiet. “I think people discredit teenagers and how wise they can be,” says Stenberg. “Sometimes I meet teenagers who are much wiser than many adults I’ve met, because they haven’t let any insecurities or doubts about themselves get in the way of their thoughts.” 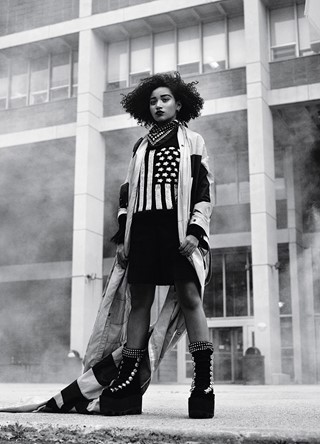 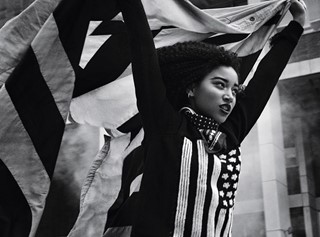 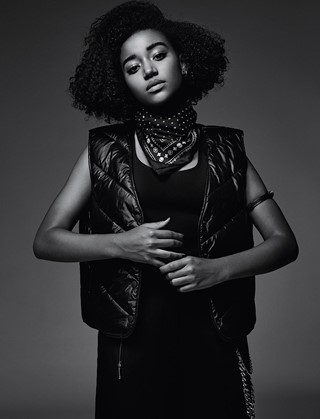 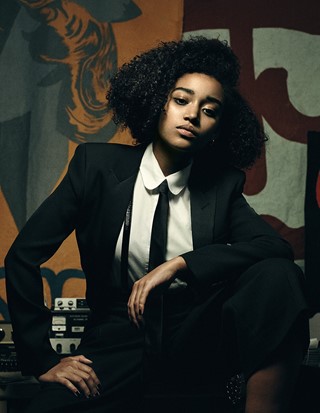 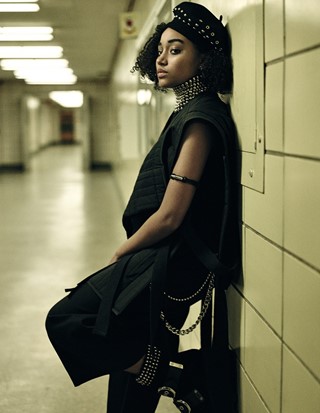 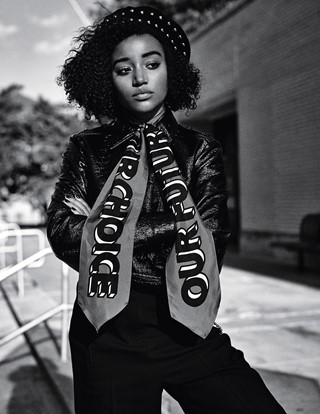 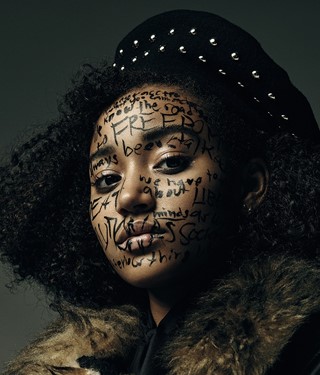 Stenberg refuses to be quoted on Kylie-gate in the wake of the resulting media frenzy. She would prefer to move on – after all, she’s made her point. Meeting her a couple of weeks before the Jenner ‘feud’ makes headlines, the actress wears a houndstooth shirt and pillar box-red lipstick, sitting in her favourite cafe in Culver City, on the west side of Los Angeles. She’s all smiles, despite recovering from an intense bout of flu. The doctor gave her tiger balm, and told her to reduce any stress in her life. Has she been stressed? “Not exactly,” she says. “I don’t think it’s negative pressure; it’s me being excited about moving forward and things evolving and becoming bigger in my career. But balancing school and work can be really stressful.” She says her mum encourages her to take time for herself, and she recently had a ‘sound bath’, a guided meditation in which glass bowls are played at various frequencies.

But the way things are going, there’ll be fewer opportunities for Stenberg to perfect her lotus pose. She’ll be shooting two indie films later this year (she’s not allowed to discuss them yet), and has been linked with the lead role in Looking for Alaska, a 2016-slated adaptation of John Green’s wild young adult novel that’s been likened to a modern-day Catcher in the Rye. When casting for the role began, #WOCforAlaskaYoung started trending on Twitter, with people calling for a non-white lead in the film and pointing out the lack of diversity in teen movies. Green got behind the campaign, and Lorde supported Stenberg’s bid for the role via Twitter.

For Stenberg and her community of friends – Tavi Gevinson, Willow and Jaden Smith, Lorde, Kiernan Shipka – it’s not enough to excel in your chosen line of work, be it acting, singing or publishing. What matters is inspiring others, sharing information and starting a dialogue. Far from the apathetic millennials of media lore, these kids have more in common with the politicised youth of the late 60s. “It’s so inspiring to see someone in the entertainment industry be vocal about critiquing it,” says Rookie founder Tavi Gevinson of Stenberg. “I’m lucky I can talk to her about being a young, independent, powerhouse woman – I think a lot about the time she compared losing your sense of self in this world to being unable to uncross your eyes.”

Ella Yelich-O’Connor, AKA Lorde, recalls being bowled over by Stenberg when they met last year. “It was early on a Saturday, and we ate pancakes with Kiernan (Shipka),” she recalls. “I felt so lucky to be in the presence of such smart, interesting young ladies. Amandla was working on a school project film adaptation of The Yellow Wallpaper, which reminded me of me – I used to do the exact same strange shit at school! She told me while we were discussing work that there weren’t many roles for young black girls in film or television. I expressed dismay, but she said it very steadily, with a clear look in her eye, no sadness or disappointment. I got the impression this wasn’t something that would stop Amandla, and I think I was right.”

It figures that Stenberg is most at home around trailblazers. In May, her (platonic) prom date was Jaden Smith – she wore a septum ring and her hair in show-stopping grey braids, and he wore a long skirt with sneakers, a look she fully approved of. “Guys aren’t allowed to express femininity; they have to always appear masculine and that’s bullshit,” she says. “I love it when guys can be feminine and express their emotions and creativity; it shows strength.” Stenberg met Jaden’s sister, Willow, after they began having dreams about each other. Willow messaged her, saying, “I feel like we are supposed to be friends,” so the two met up and talked about everything they loved for a good hour. “Then we did interpretive dance to Grimes,” says Stenberg, giggling.

Born October 23, 1998, Stenberg was raised on the west side of Los Angeles. Her mum, Karen, is African American, a New York transplant and former entertainment reporter for People magazine who moved to California 21 years ago. She met Stenberg’s Danish father, Tom, at a concert in LA. Karen raised their daughter in the Agape church, and their daughter grew up immersed in spiritual practice, meditating from a young age. Even when it came to getting the part of Rue in The Hunger Games, says Karen, there was a mystical aspect. “She had a dream of Rue, which influenced how she did her hair and dressed at the auditions.”

“I want to make things that have an impact on how we look at the world. I know it’s a tall glass to fill, but it’s a glass that really does need to be filled, as an African American woman” – Amandla Stenberg

Aged four, Stenberg did a few catalogue shoots for Disney, followed by commercials for McDonald's and Kmart. Come 2011, she’d scored her first feature film role in Colombiana (2011), co-written and produced by Luc Besson. When she auditioned for the part of Rue, she was already a diehard fan of The Hunger Games, having read the book four times. The audition was fairly typical – a reading followed by a call-back with the director, Gary Ross. Stenberg’s approach, however, was not. Convinced she had to go the extra mile to get the part, she turned up at Ross’s house covered in mud, with leaves and twigs in her hair, for full lost-in the-wilderness effect. Soon after, she found out she had landed the role.

The release of The Hunger Games in 2012 marked Stenberg’s entry into the Hollywood big leagues, but a stream of online abuse slightly soured the triumphant news of her casting. While her character was clearly described in the books by Suzanne Collins as dark-skinned, apparently this didn’t register with a small – but vocal – minority of bigoted fans. “It was my first interaction with blatant racism,” says Stenberg of the odious tweets she received. “Even though it was painful, it was important to experience it, because it connected me in a very real way to the struggle that millions of people endure every day.”

As well as producing “Don’t Cash Crop My Cornrows”, Stenberg enthusiastically curates a popular and political Tumblr page granting viewers full and easy access to her thoughts, posting screengrabs celebrating the beauty of women of colour and quotes like, “Love between two women is powerful, and that is why you are afraid.”

“Tumblr has totally informed what I’m interested in and what I care about, especially when it comes to social justice,” she reflects. “It’s such a cool platform for learning about black and trans rights.” Stenberg talks about the ‘Art Heaux’ movement, a community of black kids taking selfies and Photoshopping themselves in the name of art. “That is so amazing,” she says. “(It’s) black kids saying, ‘Look how beautiful I am,’ and defying the notion that they’re not allowed to be indie in that way.”

Does Stenberg consider herself indie? She’s not sure. On one hand, she loves Nicki Minaj and Beyoncé with her “entire heart”. On the other, she’s super-excited to go to LA’s upcoming FYF Fest, where she’ll see Frank Ocean, Solange and Death Grips. She shares her voracious interest in the arts with close friend Kiernan Shipka, the 15-year-old actress best known for her role as Sally Draper in Mad Men. “We both appreciate things that are artistic and want to watch more movies, read more books, listen to new artists and learn about new art,” says Shipka, who bonded with Stenberg over their shared passion for Studio Ghibli anime films, Haim and Taylor Swift.

If you search ‘Amandla Stenberg’ on IMDb, the website’s bio informs you that her first name comes from the Zulu word for power. Perhaps it’s a self-fulfilling prophecy. Later today, she’ll fly to NYC to channel the spirit of Black Panther activist Angela Davis, whose empowering words adorn Stenberg’s face in an image for this shoot. She’ll move there one day, she says, to enrol in film school and direct movies of her own. (As Gevinson says of her: “She is not content to speak only words she’s been given.”) Stenberg mentions that Spike Lee teaches at NYU. “I think I would die, studying with him. As much as I want to be fulfilled creatively as an actress, and get to be in roles that are meaningful and impactful, I hope the same thing for myself as a director, one day.” She smiles, the glint of fire lighting up her eyes. “I want to make things that have an impact on how we look at the world. I know it’s a tall glass to fill, but it’s a glass that really does need to be filled, as an African American woman.” In Stenberg’s charge, the glass isn’t just in safe hands – it’s shatterproof.

Subscribe to Dazed here, and pick up your copy of the new issue from newsstands now