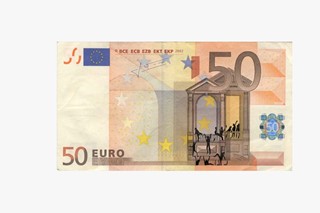 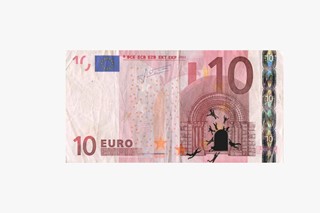 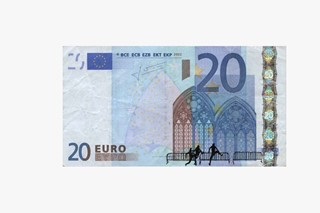 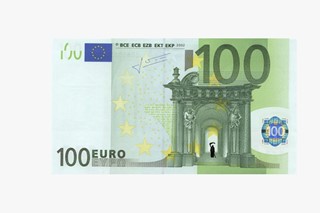 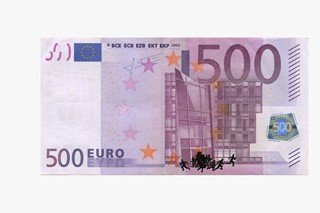 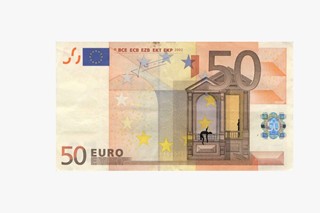 Greece has struggled through a severe financial crisis for the past five years, with businesses evading tax like it's going out of fashion and the economy hemorrhaging cash since it made the switch to the Euro. Greek artist Stefanos has figured out a novel way to express his dissatisfaction with EU-imposed austerity and greedy corporate fat cats: he's started vandalising the euro.

Over the past year, Stefanos has drawn distressing scenes and slogans on euro banknotes. He scans them for posterity and then puts the original note back into circulation – thanks to the cross-border nature of the euro, his message is able to transcend national borders and spread far and wide. One 100 euro note shows a man hung from a noose, another depicts the Grim Reaper – illustrations that spare subtlety in favour of brutal impact. Imagine getting one of these notes at the Eurostar currency exchange.

Stefanos told Designboom: "Observing the euro banknote landscapes one notices a lack of any reality, whatsoever for the last five years the crumbling Greek economy has hatched violence and social decay – so, I decided to fuse these two things. Through hacking the banknotes I’m using a European document, that is in cross-border circulation, including Greece – thus, the medium allows me to 'bomb' public property from the comfort of my home."

The future remains uncertain for Greece after it voted radical anti-austerity party Syriza into power last month. It's been hailed as a revolutionary move for left-wing politics, but Greeks still waiting to see if the party's bold beliefs can pull their country out of economic turmoil.

Liked this? Head here for more on art:

Nobody wants to buy the world's most expensive GIF