We speak to artist Lynette Wallworth about her new film to be shown at London's Royal Observatory exploring the deep sea, coinciding with last night's rare cosmic alignment of the transit of Venus 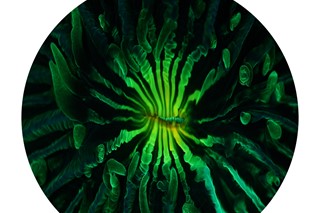 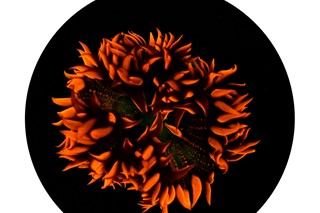 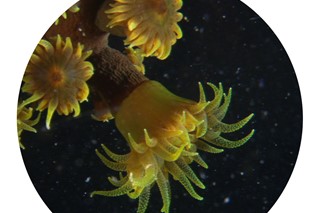 Showing tonight at the Royal Observatory in Greenwich, London, the new film, 'Coral: Rekindling Venus' written and directed by Australian artist Lynette Wallworth coincides with this morning's once-in-a-lifetime astronomical occurence - the transit of Venus across the surface of the sun. Wallworth's new film will be screened at planetariums across the world, exploring the rich, immersive visuals of the underwater world inspired by the rare event.

Made specially for astronomical environments, Coral: ReKindling Venus journeys through an 'oceanic constellation' of sea anemones, jellyfish, red sea dragons, kelp forests, crinoids, starfish, and fluorescent corals - developed with renowned underwater cinematographer David Hannan who filmed in the oceans around Papua New Guinea and the Great Barrier Reef. The unique soundtrack arrives courtesy of Max Richter, Fennesz Sakamoto, Gurrumul, Tanya Tagaq Gillis, and Antony and the Johnsons - hear the latter's composition here alongside an interview with Wallworth about the origins of the film and the appeal of the cosmic phenomenon.

Dazed Digital: What was the original moment of inspiration for Coral: Re Kindling Venus?
Lynette Wallworth: It’s a work that has its seeds many years ago when I took two small photographs with me to visit astronomical photographer David Malin. One was an image of the birth of a star that he had taken with telescope in Coonabarabran, and the second was a macro shot of coral spawning on the Great Barrier Reef , an event that I had experienced. I felt these two images held something in common and it was David Malin who gave me a big piece of that puzzle by telling the story about the Transit of Venus observations from the 1700's. That story put me on a path that has led me here, about to release a film about corals in planetariums around the world aligned to the Transit event.

The key character in that story was Edmund Halley, who was attempting to work out the exact size of the solar system. He anticipated that it might be possible to derive this calculation if there were observers of the Transit of Venus at extreme points across the globe that then brought their calculations back together. But the Transit of Venus a rare astronomical event, it occurs in pairs divided by 8 years and then the cycle starts again in around 105 years time. Halley knew he would not live to see the Transit of Venus and he wrote a letter to the Royal Observatory calling on the astronomers of the future asking them when the time came to cross the globe to observe the event.

Halley died 20 years before the Transit of Venus in 1761, but inspired astronomers from many countries to travel to extreme parts of the globe. In 1769 even more ships were sent from even more countries. The thing I found inspiring about this story is that many of the countries involved were not friends, in fact many of them were enemies and the problem they were trying to solve could not bring any financial gain. But some of those countries made agreements to allow for the safe passage of ships into one another’s territories in particular in 1769 because the attempt to solve this problem was an undertaking to the benefit of all humanity. In fact the observation of that Transit in 1769 is known as the first attempt at global, scientific co-operation.

DD: What do you think is the particular appeal of transits of Venus that inspires so many artists and photographers?
Lynette Wallworth: I think it's the rarity of the cycles that causes us to contemplate a far greater expanse of time than we usually we do. We have a moment of seeing that the cycles of our solar system are running like clockwork over millennia. It's a humbling  sensation and I think it causes you to contemplate the longevity of the planet beyond your own lifespan and generates imaginings about the state of things when the next cycle is to come around.

DD: What interested you about the relationship between Astronomy and Marine Biology?
Lynette Wallworth: When I was leaving after my first meeting with astronomical photographer David Malin, he handed me an image of a spiral galaxy and said “take a photo of home with you.” The grand, expansive perspective of astronomers, in which one planet must be viewed as part of a larger system, has been impressed upon me on many occasions since. It is part of what inspires me in terms of the hopes for global thinking encapsulated in the positioning of the work. To astronomers, the viewing of one planet is microscopic. It is the type of shifted perspective that you encounter when reading the responses of astronauts as well.

In terms of the corals, what is interesting is that the evolutionary solution they have engineered for their reproductive survival is entirely based on the alignment of the Sun, Earth and Moon. The mass coral spawning event on the Great Barrier Reef, a once a year event where each species of coral releases its fertile bundles on the same night along with the entire inner or outer reef, occurs a few days following the full moon in mid-summer, when waters are warm. In other words, The Great Barrier Reef, the only living thing that is visible from space, is responding to the alignment of the solar system. To see the corals at extreme close up, including seeing the climactic spawning event, in the viewing environment traditionally used for showing us our world in relation to the wider context of the solar system and beyond, seems a perfect fit to me.

DD: Do you think that the studies of both space and the sea-bed help to preserve nature or does the constant development of technology hinder the natural world?
Lynette Wallworth: There is a companion piece for the film that I built, it’s an augmented reality work that allows you to view posters of corals through your mobile phone and connect to data that tells you where in the world right now coral reefs are currently experiencing sea surface temperatures that could lead to bleaching events. That application is built using the latest technology but it provides the viewer with the capacity to connect to the worlds reefs. Technology can be a truly fantastic tool, particularly those technologies of this moment that allow us to connect globally. It's not technology that is the problem, it's what we decide we want to use it for.

DD: What effect do you hope your film will have on your audience?
Lynette Wallworth: What is apparent when you watch the film is the remarkable survival mechanisms already at play in the community of coral reefs, mechanisms that will be put to the test in the coming years. We might see ourselves as two different communities interconnected in our own survival. My hope is to leave the audience with a sense of wonder for the complexity of the coral community and a deep-felt longing to see it survive. I am also hopeful that the placement of the work in line with the transit event might remind us that we have the means to co-operate on global matters beyond our individual territories, a capacity to act more like corals, in unison.