Taken from the February issue of Dazed & Confused, we chat to Steve Maclean about the Occupy newspaper, the challanges they face and why it's a youth driven movement 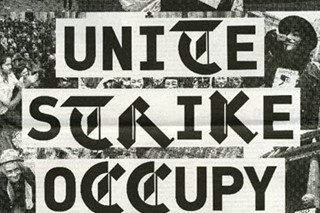 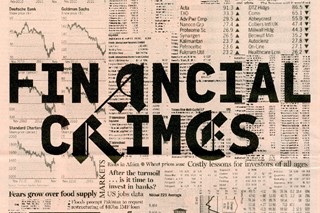 Created in a tent without electricity or internet, The Occupied Times of London has virtually no budget. Most of the staff work 9-to-5 jobs, leaving only evenings and weekends to work on the newspaper. The team also hand-folds each of the 2000 copies, and one of their editors was recently arrested at a protest. And yet somehow the newspaper has achieved more in a few short weeks than most publications ever will. The subversive political design has been praised by designers; legendary writers have asked to write for it (Noam Chomsky being one); and both activists and outside readers turn to The Occupied Times for analysis and stories on the issues at the heart of the Occupy movement.

The newspaper is dedicated to the issues which have brought rise to Occupy. That’s why the banking industry and economics are prominent in the newspaper

The newspaper started when a group of young activists met at an Occupy London General Assembly and started talking about the need for a news source free from the biases of the mainstream press. Huffington Post blogger and new Occupied Times editor Steven Maclean sent out a couple of tweets, interest flooded in, and the first issue was published within days. Dazed spoke with Maclean and designer Tzortzis Rallis.

Dazed & Confused: What is The Occupied Times’ editorial approach?
Steve Maclean: We don’t want to just run articles about the camp, it would be too insular. So the newspaper is dedicated to the issues which have brought rise to Occupy. That’s why the banking industry and economics are prominent in the newspaper. We also don’t take one fixed line. The only fixed thing is an acceptance that things are going wrong and need to change quite severely.

D&C: How is that reflected in the design?
Steve Maclean: Tzortzis and Lazaros [Kakoulidis] are very politically minded. I mean, they’re Greek! (laughs) I don’t think there’s a Greek person that isn’t political these days. They asked, ‘Would you like the design to be as radical as the ideas?’ I went ‘Yeah! Of course!’
Tzortzis Rallis: The people interested in politics will be there anyway, so we wanted to appeal to people interested in design, art or fashion, who don’t like the mainstream media and want something different.

D&C: What are the ideas behind the design?
Tzortzis Rallis: We use a typeface called Bastard designed by Jonathan Barnbrook. It’s reminiscent of the typefaces used by banks and companies during fascist times. He wanted to create a typeface that no one in the corporate sector would use to advertise. It was playful – Barnbrook was challenging people to use it.

D&C: Does it reflect the wider ideals of the Occupy movement?
Tzortzis Rallis: Yeah, I think so. We’re taking something from the past but making it better. Politics is about history but it’s also about evolution. It’s not about going back to communism – we want something that is new and different from capitalism.

D&C: What are some of the challenges you’ve faced putting out this newspaper?
Steve Maclean: The biggest challenge was working all day, every day while living in a tent. Which meant not sleeping well, being cold, not smelling very good. It’s not like waking up and you’re raring to go – you kind of want to die (laughs) – then you have to make a newspaper. Also, I’ve got no money left. But I’m not complaining. It’s probably the best thing I’ve ever done.

D&C: What have been some of the highlights of putting out The Occupied Times?
Steve Maclean: It’s a great feeling when the newspaper comes back from the printers and you see people reading it. And people I’m nervous about asking to write are like, ‘Oh, I’d be honoured’ – that’s really nice. We’ve published some of the best young political writers in the country like David Wearing and Owen Jones, as well legends like Joseph Stiglitz. But some of the best things are by people in the camp, or unknowns who have tweeted us. I really like that duality.

D&C: Have you encountered any criticism?
Steve Maclean: People say, ‘Oh, it’s all very well saying something’s wrong, but you’re not giving any solutions.’ I just find this really ill-conceived. The first step to finding a solution is to accept there’s a problem. If we were living in a society where everyone had accepted that there was problem, then maybe it would be a waste of time. But clearly we’re not. It’s not true that no one’s giving solutions. You just have to read some of the articles we’re printing – there’s no shortage of ideas.

Steven Maclean, editor of The Occupied Times of London, explains why Occupy is a youth-driven movement

For young people, the Occupy movement is more a calling than a choice. It starts with university – students know the huge debt they’ve committed to won’t be going any time soon, which is depressing enough, but to be told by lecturers that employment opportunities in your industry of choice look bleak before you’ve even graduated is soul-destroying.

Plato is thought to have said that “necessity is the mother of all invention”, and we’re inventing a new kind of society, with new ideas and values. That wouldn’t be happening if there wasn’t a wide-scale perception that drastic change has become a necessity. The hike in tuition fees – overseen by a deputy prime minister who promised students he wouldn’t allow it – coupled with the highest levels of youth unemployment this country has seen for over 17 years means the aspirations of an entire generation lie in tatters.

When people went into higher education, they used to enter into an unwritten social contract that said, “If you work hard and prove you are capable and intelligent, you’ll be rewarded with opportunities.” Now it’s more like, “Here’s £9,000 worth of debt; work hard if you want but you probably won’t get a job at the end.” Is it any wonder the student protests turned ugly?

Faced with this situation, it would be absurd to carry on as if there’s no problem, so it’s unsurprising that so many young people are involved in Occupations around the world. Social movements are built on young people because there’s a chance they haven’t become conditioned into “the way things are” – they still have the courage and imagination to picture a different world.

Occupy is about regaining that youthful wisdom and pointing the finger at things which aren’t fair. The world as we know it is the creation of those who have lived before and who are here now. But the future is the preserve of those who will be around to make it.