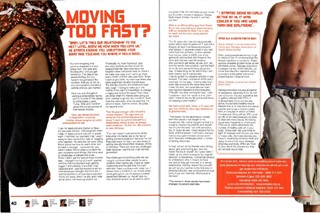 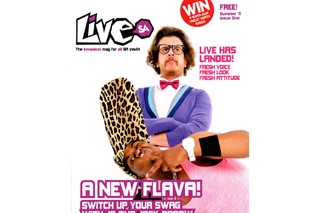 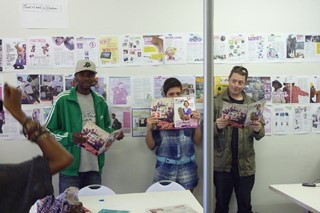 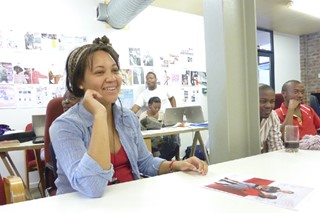 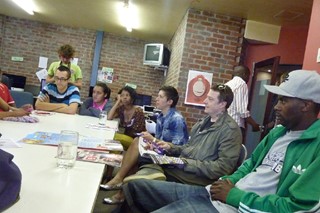 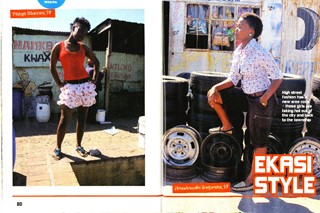 Risking exposing my lamentable ignorance of Cape Flats rap in front of such an eager audience, I interrupted to ask Rattex exactly what ‘spaza’ is, the movement he’s a pioneer of. “It’s Xhosa hip hop, from ekasi (township),” he explained. “Something we created ourselves. You know the shops? (Spaza shops are informal township stores that sell a bit of everything.) It’s not only Xhosa, though. There’s Zulu, whatever. If you rap in your mother tongue, I call that spaza.”

Born in Nyanga, Rattex grew up believing his mother was his sister. Aged 9, he moved to Khayelitsha with his grandmother to escape his violent, alcoholic grandfather. He never knew his father. Now a successful MC, his name references his deadly rhyme skills; it comes from a popular brand of rat poison used in the townships of South Africa.

As his official bio puts it, “The dusty ghettos of the Cape Flats are notorious around the world for their harsh conditions, rampant poverty and crime.” While the young people on this project come from a wide variety of backgrounds and locations in the Western Cape, including wealthy suburbs, it’s a story many can identify with.

Settling back to watch the group continue debating the intricacies of the local music scene, it struck me how much these young journalists and photographers had grown in confidence in the past few weeks. I watched connections being made between them and the artists, keen to ask opinions on everything from freestyle technique to the restrictive media bill currently making its way through parliament; in their ways, both magazines and hip hop create shared spaces for people to talk about life, entertainment and social issues.

In South Africa, where little media addresses the youth directly, and many communities remain cut off from each other, the initial reactions to a magazine made by young people “for ALL South African youth” has been enthusiastic, judging from the reactions at sessions with NGOs in Khayelitsha and Masiphumelele.

Later that afternoon, as 50,000 copies of the first issue made their way to places just like Nyanga and Khayelitsha, I spoke to 21-year-old editor Nicola Daniels about the project and these connections it fosters. Mixed-race (or “coloured”) and pregnant, she is from Manenberg, also on the Cape Flats, one of the few non-Muslims to attend a Muslim school (“It scarred me in a way”). She went to London for eight months when she was 15, while her separated father was teaching there, and explains that’s where she got her confidence back – “It was more integrated… I was very independent.”

One day, she returned home to find her father had split up with his wife. He told her and her younger brother that they had “messed up” his life, and that she had left him “because of you”. They had to pack their bags in a few hours and fly back to their mother’s in Manenberg. (“Hec-tic!” she sighs.)

Manenberg was built by the apartheid government for low-income “coloured” families; now overcrowded and home to an estimated 70,000 residents, it is notorious for violent gangs and high levels of crime. Nicola says that because people's mums are factory workers, live on grants or never finish school, that's all they see; motivation is the main issue there, she explains. “People don’t see what’s beyond them. You’re stuck in the cycle, you just don’t think beyond this. Even if opportunity is there, they don’t even try.”

Does she like it? “I do, because I’m used to it,” she smiles. “Manenberg is very community-based. When I come home in the afternoon, I always say hello to like ten people before I get to my house. Lots of kids in the streets, lots of people… One thing I like about living there is that it’s very ALIVE. You go to the suburbs, it’s very quiet – people are too scared to talk. In the ghetto, people are close – they look after each other.”

“My brother is a stoner, there is a guy who was in prison who is his idol – he gives him advice. He wrote a book, about (South African prison gang) the Numbers Gang, he was part of that. He looks very thin now… but he has amazing stories. All the boys go to his place, and they can smoke weed. Only weed. This guy is reformed – he doesn’t support gangsterism, he loves that my brother makes good music. He’s like a positive role model for the boys.” I ask if the girls have any role models, and she thinks for a while before saying no.

Does she think the Live SA project is important, ultimately? “I do. I see this magazine as not just entertainment for a young person, but as a useful tool. Because for people, just knowing sometimes that opportunities are out there, and knowing that the person writing the story is just like you… Sometimes, people don’t know they can do it. And just showing them that they can… saying like PLEASE grab that opportunity! Invade that space, man! Invade that white space and change it up a bit.”