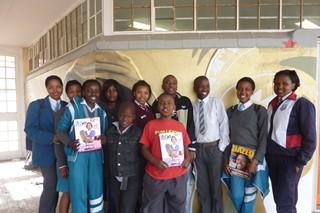 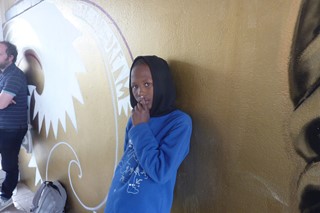 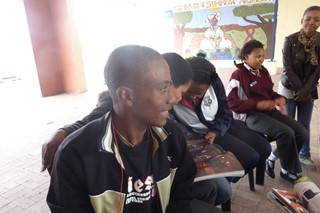 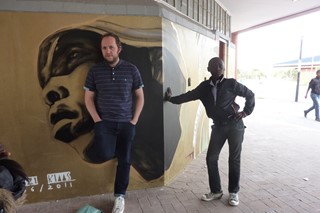 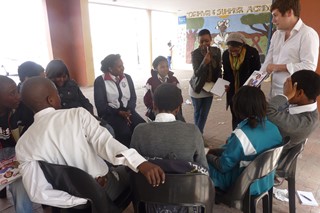 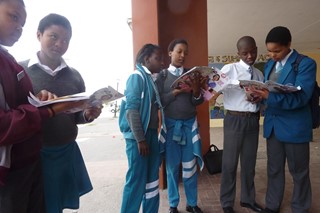 The first issue of Live SA hits the streets later this week, with 50,000 copies being distributed to young people across the Western Cape and Gauteng provinces, home to Cape Town and Johannesburg respectively. With the fried chicken, cupcakes and celebration of the completed issue now just a memory, planning of the second issue has started in earnest. Stories under consideration include beauty pageants, music pirates, and women who are attracted to gangsters.

On Wednesday, Cristle and Vanessa from the magazine and myself, plus two of the project directors, drove to Khayelitsha on the Cape Flats, one of South Africa's biggest 'townships', to run a workshop with ten teenagers. In Makhaza, as this particular area is known, the youth centre we meet at was burned out in April this year, during a violent protest following the police’s destruction of illegally erected shacks nearby.

The high school at the end of the street has also recently been the scene of violence, with students going on the rampage to demand justice for the corporal punishment of one of their pupils, so violent that it left the victim in hospital with spinal injuries. As reported in the first issue of Live, two security guards assaulted an 18-year-old student after they discovered a mobile phone hidden in his sock. According to a friend of the student’s who witnessed the attack, the principal ordered them to “Beat this dog up.”

We ran through this story and some of the others in the issue with the teenagers, aged 15 to 17. Shy at first, they slowly warmed up and talked about what they liked in the magazine, becoming most animated about “Ekasi Style”, four pages of street fashion shot in their own ‘ekasi’ (township).

As well as exhortations to include Lil Wayne and Drake, plus pull-out posters of Rihanna, ideas discussed included a ‘township exchange’, in which young people from Khayelitsha travel to experience life in Soweto and vice versa, and a potentially hilarious challenge in which young people from their area travel to a posh city gym and try to learn yoga.

Some of the photographs here were taken by a young boy, perhaps eight years old, who stopped by and took an interest – because the Ikamva Youth room was busy, we were out doing our workshop on some chairs in the street. The boy spent a happy hour and a half with my camera, filling up the 8GB card with hundreds of images and videos, until someone worked out his plastic bag contained the meat his family had sent him out to get for their evening meal. We quickly sent him on his way, before an irate matriarch could come and berate us for distracting him from his task.

This week is my final one in Cape Town, and I’m glad I will be here to see the first issues hit the streets. I hope the reaction from young people who know nothing about the project will be as positive as those groups in Masiphulememe and Makhaza.