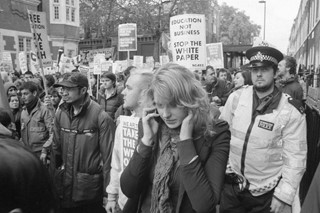 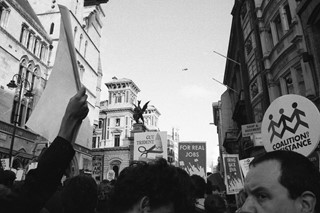 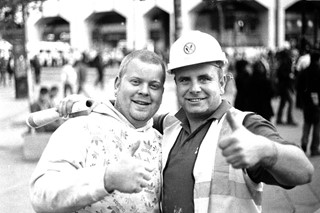 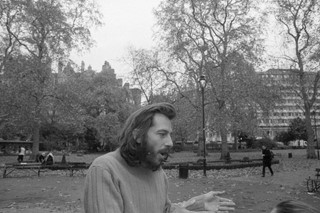 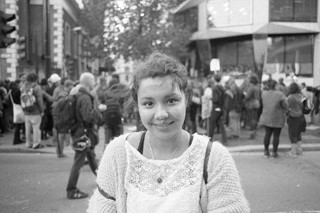 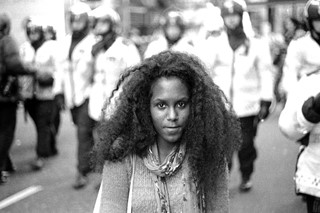 “You’ve got the 'Apocalypse Now' scene— our masters trying to survey us in case we burn down the trees,” quipped Kings College London Professor Alex Callinicos standing atop a bench in Russell Square, addressing a crowd at the National Demo Against Fees and Cuts amidst the jarring din of police helicopters overhead. It was a day of protest—peaceful protest—as a coalition of students, workers and activists took a definitive stand against the government’s blatant disregard for affordable education and the failure of crass, crony capitalism.

On the morning of November 9th, a series of ‘teach-outs’ hosted by Tent City University kicked off in Bloomsbury. Guardian columnist Polly Toynbee ran through a depressing calculus of unemployment numbers and the radically irresponsible axing of the Education Maintenance Allowance for 16-19s. Facts and figures— such as one year of bank bonuses could pay for 23 years of all the youth services that have been cut by Cameron’s government—feel so grossly unfair that they land like a swift kick to the gut.

Facing extortionate £9,000 university fees starting in 2012 and a wrecked job market, George Barda, a recent Masters graduate and Green Peace Street Campaigner, explained “Of course students are angry about what’s happened to them , though it’s not about being angry on a selfish level, it’s about being upset because of compassion, because people care about what happens to the world.” Anxious that education is being treated like a business, he said, “For me, the underlying problem is that university should be about giving people the chance to look at the world differently, and question the orthodoxy that every part of our lives should be geared towards maximising the value of the market.”

At noon, the crowd moved from the autumnal environs of Russell Square towards the primal thumping drumlines of the thousands joining the main march starting from Malet Street. The atmosphere was festive, and on Charing Cross Road, 21-year-old student Al was throwing down spoken word rhymes in an effort to bring music to the people. He had a pile of print outs with re-written lyrics to songs everyone knows, breaking out in a round of “We Want Free Public Healthcare” to the tune of “We Wish You a Merry Christmas,” which sonically was more like a wholesome Glee number than an in-your-face Billy Bragg-esque screed. It felt appropriate, as the deliberately paced march lacked any the hot-headed hysteria of the riots, but was instead a popular movement looking to create change from the bottom up.

On the whole, the protesters aren’t anarchists, and they’re not the squalid scruffs their detractors make them out to be. Instead, they’re an abandoned generation who want their voices to be heard. Haleluya, a petite, fiery 17-year-old sixth form student from Harrow, will be directly effected by the tripling fees, and is back pounding the pavement after witnessing the chaos the erupted through last November’s student demonstrations: “The protest last year attracted people who didn’t have the right intentions to come and cause trouble, and that meant that ordinary people like me and my friends who were really passionate about the cause got labeled as delinquents. We were protesting then, and are protesting today, because what is happening to us is complete crap, and it’s unfair.”

Winding through the city, one of the biggest roars from the crowd came when passing a team of builders watching the march from their scaffolding. Chants of “Students and Workers Unite and Fight” were particularly heartfelt and powerful.

Darkening the mood was a police presence—about 4,000 strong—that felt more like a fluorescent barricade of bogeyman than protectors of the peace. The day before the march the Met sent out letters warning that police were permitted to fire lethal baton rounds if they saw anti-social behaviour. Minnie, a 24-year-old tutor, was “quite surprised at the number of police with riot gear, attack dogs, helicopters and horses”, calling the letter “a pretty outrageous tactic, and flagrant intimidation factor on the part of the police.” Resentment simmered, eliciting from some a chorus of “you can shove your rubber bullets up your arse”, but it never came close to boiling point.

The real peacekeepers were the young people out in force. Yasmin, 17, studying Philosophy, French and Psychology, said “I think capitalism in itself causes destruction, but this shouldn’t be a revolution of violence, it should be a revolution of ideas. When people ask ‘why are you here?’ people say ‘we’re here to talk, we’re here to discuss’ and I think that’s amazing, It’s not a paternalistic left wing ponce saying we’re going to tell you what’s right for you—there’s a realisation of the masses for themselves, its an organic thing, and I think it’s happening now.”

In the beginning of the day, in a statement that echoed Dylan’s “Subterranean Homesick Blues”, Professor and Marxist educator Dave Hill spoke to the palpable sense that something has changed, that the Occupy movement is gaining undeniable momentum: “I’ve been making speeches for 50 years, and, to use a rather vulgar phrase, sometimes it’s felt like pissing in the wind. But the wind has changed direction! The landscape has changed. The protest has changed!” Harnessing this power, what’s important now is that the movement maintains its resolve, and continues to be a lightening rod for all those across the political spectrum fed up with the greed of the 1%.