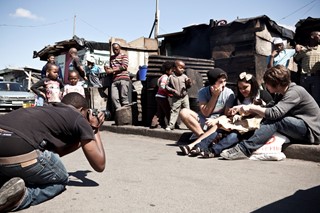 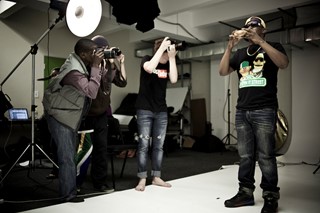 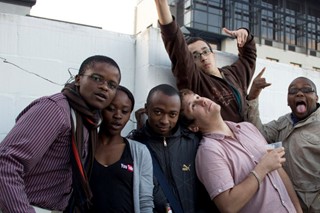 Today’s lunch was the notorious ‘Gatsby’ sandwich, a South African speciality – cheap sausage, fried eggs and greasy chips encased in a giant bread roll that is so heavy on the stomach it has left me barely capable of motor function, let alone effective magazine production.

Fortunately, the first issue of Live SA is now finished after a hectic week in which the 21 young people that make up the Live team have got to grips with making their features, fashion stories and other pages print-ready. Considering that almost all of these young people have never worked on a magazine before, this is no small achievement, and one which has been attained with vast amounts of energy, good humour and sheer, unflinching optimism.

South Africa remains a divided nation, despite the advances made in the 17 years of democracy and freedom following apartheid’s end. Residents of the townships, almost all black or “coloured” (South African terminology for mixed-race, which sounds harsh but is in common usage here), continue to face endemic problems of isolation and alienation, leading to entrenched social problems: high levels of unemployment, crime, violence and drugs (such as the current ‘tic’ – crystal meth – epidemic, particularly virulent in Cape Town where this project is based).

The young people (roughly 18-25) working on this project have been largely recruited from various townships near Cape Town, and the quarterly title is based on Live magazine, the successful Brixton-based social enterprise that has been running for ten years. With the offices in Cape Town itself, the magazine team travel in four days a week, with a small team of mentors (which, for these four weeks, includes myself) helping them through the process, from planning, commissioning and writing to subbing, design and photography.

While giving these young people training, empowerment and opportunity, the magazine itself also has big plans – publisher Gavin Weale of Livity has a vision that sees them “printing 50,000 copies, aiming to launch on mobile and becoming THE voice for youth in South Africa.” Through working together, the people on this project have also been thrown together with other young people of different backgrounds, causing them to “face our own issues of race and identity as South Africans,” as 21-year-old editor Nicola Daniels puts it.

With most publications here aiming to fill particular market niches through targeting specific racial groups, Live SA plans to buck that trend. Its first cover brings together two young rappers, one black and one white, and gets them to swap their clothes, or “switch up their swag”. Nicola says it’s important that they had a cover story that “bridges the gap between races and appeals to everybody.”

With the first issue at the printers, and due to hit the streets on November 15, thoughts are now turning to the second issue – next week, we will be doing a series of planning meetings in the townships, talking to young people there about the kind of stories they would like to see. Together, they will also come up with a new “Live Challenge” for the mag writers, a regular series that this issue saw three young people get to grips with the “smiley” (or “skop”): rather gruesome-looking boiled sheeps’ heads sold by the side of the road in townships across South Africa. After the Gatsby, I’m up for pretty much anything.