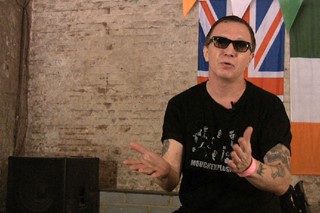 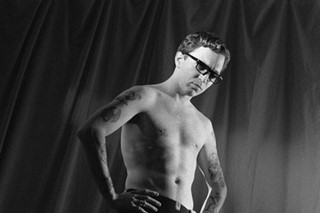 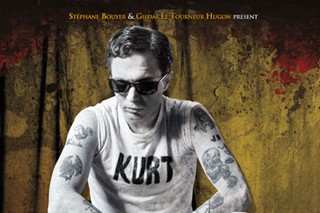 Canadian-born but LA-based underground filmmaker and queer cinema auteur Bruce LaBruce has been making his low-budget DIY films, peppered with scenes of explicit sex, since the mid-80's. His most recent films, 'Otto; Or Up With Dead People' and 'LA Zombie' fuse of gore and porn with a strong political agenda on the state of present-day homosexuality. Documentary filmmaker Angelique Bosio chose him as a subject for her next project, 'The Advocate For Fagdom', its title taken from a letter written by Kurt Cobain endorsing LaBruce's work. Bosio's film premiered at the Berlinale, and was also screened in competition at the 27th Warsaw Film Festival. After the screening, we sat down with LaBruce to get his take on the film...

Dazed Digital: How did this project come about?
Bruce LaBruce: Angelique had done a long interview with me for her film "Llik Your Idols", a documentary about the Cinema of Transgression in New York, but she didn't use most of the material she shot of me. That gave her the idea to use those interviews as the starting point for a documentary about me. I'd been approached before to have a doc made about me, but had declined. But Angelique said she wanted to focus primarily on my work, which appealed to me.

DD: Do you feel your work were appropriately represented in the film?
Bruce LaBruce: I'm not sure what constitutes appropriate representation. I think it's a really good documentary to introduce my work, which can be difficult for some people, to a more mainstream audience, which is also something that appealed to me.

DD: Are you comfortable with the film's title?
Bruce LaBruce: At first I wasn't too keen on it, but then it kind of grew on me, especially when you consider the source is Kurt Cobain!

DD: A large chunk of the film is dedicated to your friends and peers trying to define both politically and artistically. How would you define yourself?
Bruce LaBruce: That's a very broad question, so I'll give you a very broad answer. I am a filmmaker.

DD: Your recent works bend towards horror. Why did you choose that genre?
Bruce LaBruce: I've always related to zombies, so it wasn't a big stretch for me. I also figured that making genre films, particularly zombie films, would probably get my work seen by wider audiences, which has been the case.

DD: You have spent some time in Berlin. Are you feeling just as inspired by that city as you were by LA in the 90s?
Bruce LaBruce: Almost! They are my two favourite cities. They're like polar opposites, but those oppositions appeal to me. My movie Otto; or, Up with Dead People is very much a Berlin film - dark, gothic, moody, bruised, Old Europe - while L.A Zombie is extremely L.A. - harsh sunlight, relentless traffic, a modern aesthetic, the ocean, the American frontier, etc. Berlin is like a very complex old man and L.A. is like a teenage girl who has probably been violated. Or something like that.

DD: What do you think has a more visceral effect in LA Zombie, the gore or sex scenes or the combination of the two?
Bruce LaBruce: I think the idea of a creature who can fuck people back to life is what people can relate to the most. After seeing the movie a lot of people have told me that they do it all the time.

DD: How do you feel about the appearance of explicit sex in 2000's European cinema, in films such as Baise-Moi or 9 Songs?
Bruce LaBruce: I love Baise-Moi. The film is so strongly feminist and I think it was very influential. I love the harsh video aesthetic as well, which now looks quite exotic and yet very realistic. But it seems like more mainstream movies with hardcore content come and go in small waves. It's cyclical, depending on the zeitgeist.

DD: You have staged Schönberg's opera, Pierrot Lunaire in Berlin. How does directing opera compare to your other work?
Bruce LaBruce: It was a great experience. My films are usually so low budget that I have very few rehearsals with the actors, or none at all. In my theatre work I've had up to four or five weeks to workshop the piece with the performers, and develop it with them on a more collaborative basis. It's satisfying in a different way from making my movies. Pierrot Lunaire was the first time I had directed material that I hadn't written myself, so that was challenging, and more interpretive.

DD: What are you working on right now?
Bruce LaBruce: I have several films in development, one of which is called Gerontophilia.