In Chicago, artists initiate interdisciplinary and intergenerational exhibitions in their backyards, basements, showers, and even in their flower vases. It’s the spirit of experimentation fostered by the city’s academic institutions, especially the School of the Art Institute of Chicago, which cultivates a multitude of talented artists each year.

According to Kate Sierzputowski, co-director of Julius Caesar and programming head of EXPO Chicago 2022, these shoestring projects are prone to extinction and rebirth from their rapid burn-out. It’s unsustainable to produce shows every six weeks in a filthy, leaky space on top of operating a practice and job. MICKEY, which began as grassroots venue Courtney Blades in 2010, underwent a process of “forced upscaling and metamorphosis” in 2018 to remain viable.

The gallery, which is committed to advancing artists’ careers, aims to build long-term relationships with collectors and acknowledges that sales alone do not forecast success. Nevertheless, legitimisation makes it harder to organise shows purely for fun. With its playful approach, Barely Fair, which launched in 2019, aims to bridge this gap by combining emerging and established galleries in one international, miniature art fair. Tables lower than belly height allow viewers to peek into dollhouse-sized booths.

In Chicago, visitors can enjoy as many as ten shows in one afternoon across neighbourhoods (assuming they have a vehicle). While established galleries across River North and West Town usually coordinate openings, artist-led spaces have a hard time connecting since they are scattered. Despite the geographical dispersal of creativity, Chicago still faces the consequences of redlining, which enforced segregation during the 20th and 21st centuries.

The Black Arts Movement was largely rooted in South-side neighbourhoods – for instance, Bronzeville-inspired American poet Gwendolyn Brooks’ seminal poetry collection, “A Street In Bronzeville” (1945), while the Grand Boulevard area is home to visual artists AFRICOBRA’s outdoor mural “Wall of Respect” (1967-1971). In light of the city’s complicated history, many artists develop projects that address social issues: be they policies, politics, or placemaking. Chicago’s Black, Indigenous and People of Colour (BIPOC) artists frequently create artistic spaces within their communities, but sustaining their practices beyond these is the challenge.

The low rent in Chicago and its centralised location within the US make it a prime launchpad for growth and development; just two hours from New York and four from Los Angeles by plane. Artists thrive here, there is no pressure to fit into a trend and the culture of competition is absent. Because of this, creatives are not only supported but also have space to experiment with mediums and take risks than in more densely populated areas.

Although artists often start in Chicago and then leave to pursue a global audience and greater earnings, its role as a training ground is changing. Technology has played a significant role in people staying longer and investing more, in large part because everyone involved is increasingly socially connected. Since the city is persistently on the move, so too are its project spaces and apartment galleries. But while the Windy City’s environment changes continually, the prominence of artists remains constant.

Why Chicago’s art scene is thriving7 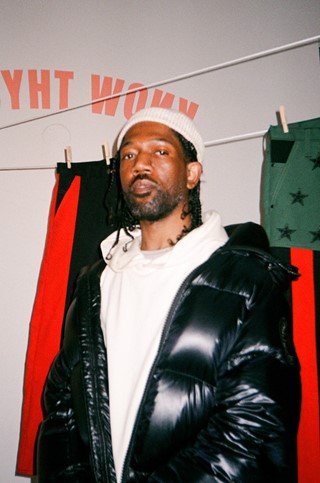 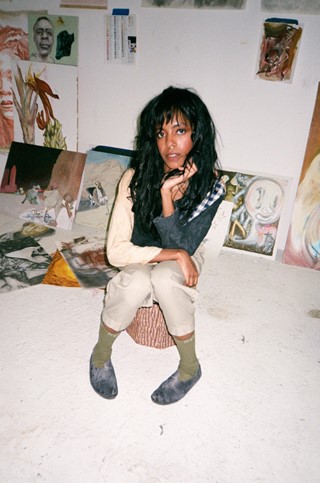 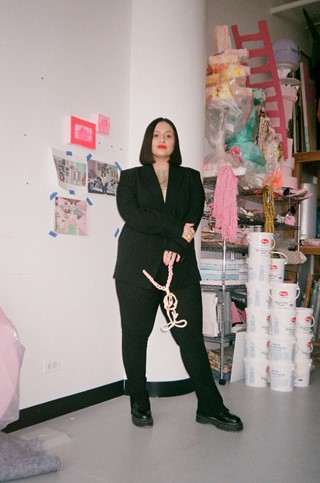 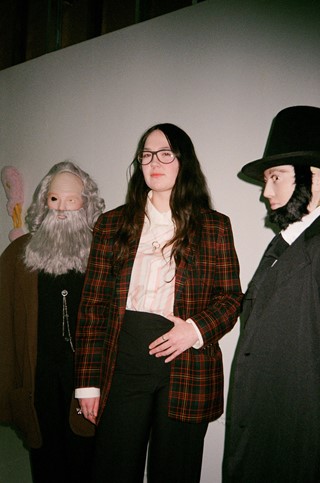 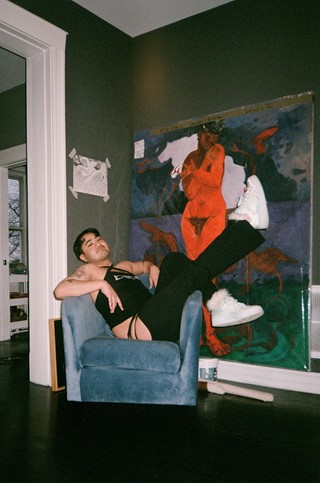 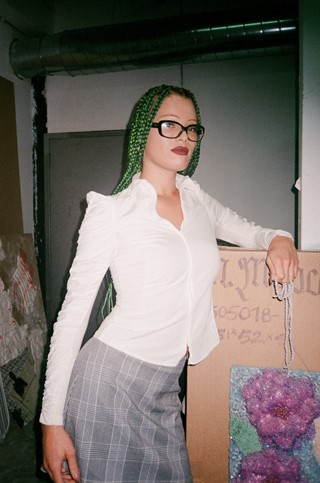 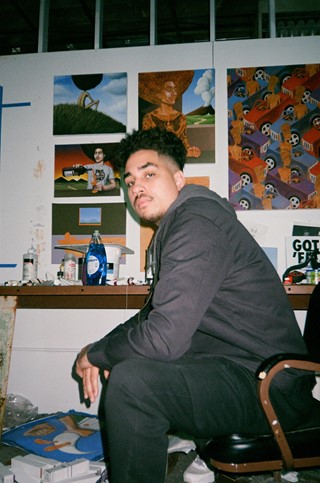 Graphic design, music and fashion intersect in artist Brandon Breaux’s practice. His penchant for portraits stems from studying those who impact him. Having led a fast-paced life, gratitude guided his “Meditation” (2020) exercise series, and appreciation guided his “28 Days of Greatness” painting series (2021). The artist’s first solo exhibition “Big Words” at Blanc Gallery combines typography with figures, testing the mind’s right and left functions. Despite the title suggesting complex language, his ’big words’ are exactly that: ’Seen’, ’Dignity’ or ‘Lord’.

By buying a home in his childhood neighbourhood, the artist became rooted in his family dialect. Then he realised he didn’t want to speak in another’s voice about his practice. A central theme presented is not conforming his work to someone else’s language. His artworks examine the expectations of jargon and how it defines areas. According to Breaux, “the language we use and what we express do not directly correlate, since we all perceive things differently.” ​​A lot of what we say is not even of our own choosing but is influenced by socialisation and conditioning.

Having studied sculpture in Baltimore, artist Taína Cruz began painting after relocating to Chicago. Her fondness for image-making stemmed from collecting visuals on Tumblr and Dump FM. Her free-flowing pieces explore colour and materiality through intuition. The artist grew up in New York and has family ties to Puerto Rico and North Carolina, which explains the blend of agriculture and graffiti in her work. Having ancestors who lived in America for 400 years, she describes herself as “coming from a magical heritage where spirituality exists even in the dirt.”

Exaggerated characters with elf ears combined with symbols like weapons are used by the artist to address mysticism, satirise the witch stereotype, or uncover meanings behind objects. Despite their evil nature, her villainous characters also enjoy comfort. Her work falls into satire-horror tropes, especially when reconciling trauma, colonialism and Black femininity. Cruz’s portraits possess an otherworldly quality, their neon colours evoking traffic lights as well as sunrises and sunsets over Lake Michigan. In her role as a guide and storyteller, she believes discussing history is important. However, even more so is ensuring their survival.

The visual lexicon of artist Yvette Mayorga intersects consumer culture, immigration and militarisation with Rococo iconography. She grew up in Moline before moving to Chicago, where her parents settled in the 70s after emigrating from Mexico. 50 years on, Mayorga revives her family’s forgotten history through her work, exhibited in colourful containers at the acclaimed group show Skin in the Game.

The artist builds layers of acrylic directly onto canvas and wood, which she squeezes from a piping bag, presenting narratives in a celebratory and intricate way. A first-generation Latinx, her artwork is informed by labour-intensive techniques such as cake piping, which recalls her mother’s former occupation as a baker. The hints at food correspond to consumerism, which is a culture of capitalism. The American Dream, an ideal rarely realised, is subverted through Mayorga’s use of a Late Baroque aesthetic, very à la Marie Antoinette. The colour pink is used to satirise this facade, suggesting femininity. Her practice draws on girl-centric, decadent and opulent celebrations that she claims reflect the flourishing of culture of immigrant families in a foreign land.

A Chicago local, artist Isabelle Frances McGuire combats depression with their artwork at MICKEY in EXPO Chicago. They explore how people cope when losing agency or power, especially during times of climate disaster or accelerated political turmoil. The artist’s sculptural machines, coded to move and generate a symphony of sounds, evoke emotion. Their silicon faces are sourced from sex robots and their oversized female bodies are modeled after child mannequins. Being plus-sized in their childhood, they are interested in the complexity of human form in relation to society.

The sculptures, which have youthful faces with aged features, cosplay a movie incarnation of 16th US President Abraham Lincoln and a videogame avatar of ​​​​German philosopher Karl Marx. It’s no surprise that people turn to games and movies for solace amid today’s chaotic conditions. In the words of McGuire, they seek “a simulated control or a sublimated release of anxiety, disenfranchisement and powerlessness.” In their practice, they explore minimal means of making people comfortable and use this tactic to awaken people’s repressed feelings about the world.

His compositions combine art historical trolls with Kim Kardashian’s posts, serving as suits the artist can wear to enter into or project fantasies onto. The figures may even bend over to accommodate the canvas’s square shape, letting as many pinpoints through as possible. Carol Ockman’s book Ingres’s eroticized bodies (1996) influenced Partida in tracing where the feminine or ’other’ gender originated in art. The author describes the crossover between femininity, seduction, and beastliness. The soft body shapes that Partida uses explore how gender is perceived. His oil depictions emphasise the queer-coding of villains through their long capes and thigh-high boots, making them appear menacing and evil.

Though artist Nereida Patricia’s beaded and glittered art appears digital, it’s been handcrafted in Chicago. While living in New York, she created miniature paintings in her bedroom, now her works cross sound, text and sculpture. Having Peruvian ancestry, she is inspired by Arpilleras, patchworks made by Chilean women for social action. Her works don’t avoid pain and protest, explaining, “as a former sex worker, my experiences find their way into my work, sometimes troubling ones.”

Skeletons often symbolise mortality and issues of biology, along with doves signifying transformation at funerals and weddings. Latex and rubber are seductive materials used to paint vogue performers, people sporting looks, and the queer nightlife scene. Her textural pieces explore trans femininity, violence, gender, Black queerness, alternative family structures, remembrance, and natural processes in the body. Growing up with her father who was a construction worker, she is highly concrete-forward, even photographing jewellery in the cracks of sidewalks. Diagnosed with autism as an adult, she has also worked alongside Arts of Life, a collective of artists with developmental or intellectual disabilities. Her process of creating art in a physical space is spiritual; a communion with her personal narrative.

Originally from St Petersburg, Florida, artist Jake Troyli moved to Chicago in 2020, attracted by its welcoming community. Since then, Troyli’s figures have transcended the canvas. Taking his cue from Renaissance paintings, he emphasises Black figuration to reflect their absence from the classical canon. His oil paintings depict him posing naked for the viewer, exploring the paradox of empowerment and vulnerability. Despite their centre stage, his subjects are reduced to objects to be consumed. Besides being difficult to contain, his self-portraits do not fit into the limited space.

Black figuration is complicated for the artist since it is in vogue at the moment, but he also benefits from it. As a Division One basketball player, he was fascinated by the notion of being on display and part of a spectacle, where he was often treated as a commodity, yet nevertheless presented with opportunities. In his solo exhibition Slow Clap at Monique Meloche Gallery, he created an array of bold, blown-up figures that represented anger. With social media in mind, they suggest a theatre of mourning, whereby people claim allyship and use grief to gain cultural capital.