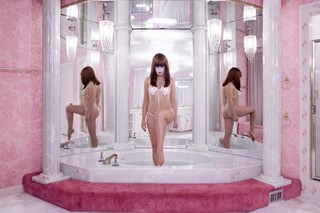 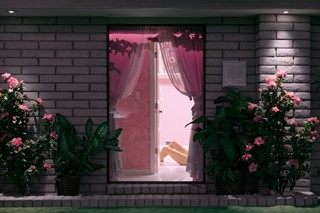 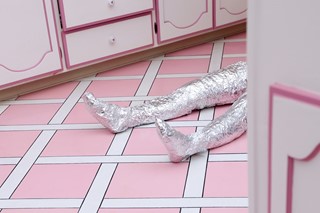 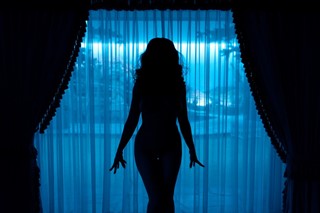 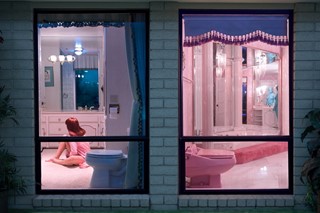 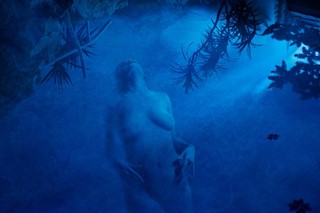 When Juno Calypso arrived at the underground house in Nevada, she didn’t know what to expect. Aware of the address and its unique history – Girard Henderson, the founder of Avon cosmetics had built the luxury space, and lived there (26 feet underground) with his wife, a Hollywood hairdresser to the stars – she wanted to capture something more than mere “opulence”. After just a few days, Calypso became fascinated by the space, which she likens to “a tomb or a mausoleum. It was so quiet down there and nothing had faded because there isn’t any natural sunlight. It’s a time capsule”.

The artist’s musings on the permanence of life became all the more pronounced when she learned more about the house and its current owners. She discovered that they were a “mystery group”, existing quietly and belonging to the so-called cryonics movement. Although the space is now physically unoccupied, it’s “perfectly preserved” by a caretaker living alone above ground – a ritual that befits the sense of continuation advocated by cryonics.

Known for tackling topics such as life, death, beauty, and deterioration, through staged self-portraits, Calypso’s photos are there to catch you off-guard, to push you to the point where “opulence” and “depression” amalgamate to form an ambiguous image. Ahead of the show, we talked to the artist about life, death, and society’s desire to make everything last.

“I was imagining what the wife would be doing in this immaculate house, free from the dangers of the world upstairs but also cut off and isolated from it” – Juno Calypso

The history attached to What To Do With A Million Years is multi-layered. Can you tell us about it?

Juno Calypso: The project is shot and focused around the story of this house in Nevada. It’s an underground home, built 26 feet below ground in the late 1960s by a wealthy businessman and his wife, a Hollywood hairdresser to the stars. It was the time of nuclear war paranoia. This wasn’t a typical bunker though. They wanted to live down there full time, and they thought that was the future. So it has a swimming pool, guest house, dance floor, barbecue, plus an artificial garden surrounding the house with lights that can switch from dawn to daylight to dusk. The original owners both passed away from natural causes, but the house has been kept intact in its original form. It’s changed hands a few times but is now owned by a mystery group with an interest in immortality.

In your work, you like to put your characters through the rituals that would otherwise play out in the spaces you inhabit. How did you stage these moments in this space?

Juno Calypso: I didn’t have an agenda beforehand, so everything you see was an improvised reaction to my surroundings. The house reminded me of a tomb or a mausoleum. It’s so quiet down there and nothing has faded because there isn’t any natural sunlight. It’s a time capsule. I was imagining what the wife would be doing in this immaculate house, free from the dangers of the world upstairs but also cut off and isolated from it. When I discovered the current owners were into cryonics and the pursuit of immortality, that feeling just intensified. Imagine living down there, forever. For all eternity. Imagine just living forever. What would you do? How would you feel?

The preservation of the living and the dead is central to the exhibition. Are the two interconnected?

Juno Calypso: In the eyes of the cryonics, death is a disease that can be cured. People don’t die, they have just failed to be preserved for the next life cycle. The people in liquid nitrogen are not dead, but suspended in time. The beauty industry knows that fighting ageing is a bit nicer for the consumer to digest than fighting death. At the core, they are both doing the same thing. They’re making a promise, offering a golden solution to a problem that, right now, is inevitable. Everybody is going to age and die, and so the entire population is your target market.

The language used suggests an exasperation for eternal life. Would that be accurate?

Juno Calypso: I took some of those titles from the cryonic magazines that I was reading in the house. They were titles of serious philosophical essays, but being a depressed, cynical, pessimist, they jumped out like dry humour to me. Whereas an optimist would probably be excited by the idea of living for a million years. The danger in being fixated by your future is that you don’t get to fully enjoy the present.

“Imagine just living forever. What would you do? How would you feel?” – Juno Calypso

Do you think it’s fair to say that we all obsessed with capturing moments and making everything last?

Juno Calypso: I read somewhere that if you want to find out what someone fears losing the most, ask to look at what they take pictures of.

What do you hope people will take from the exhibition?

Juno Calypso: I was at this place by myself for weeks. It was such an exciting yet terrifying experience and I don’t know what people will make of it. I just can’t wait to share it. I suppose it’s a bit like the location, like Vegas, like Liberace in Behind the Candelabra. Opulence, but make it depressing.