The pioneering artist, who uses performance, installation, and film, in ways that echo surrealism, opens her biggest UK retrospective in London 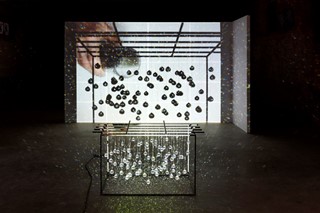 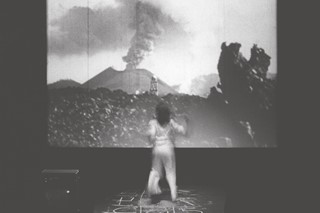 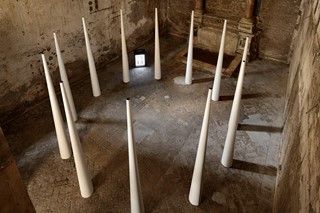 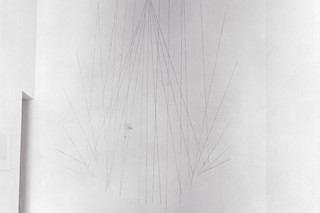 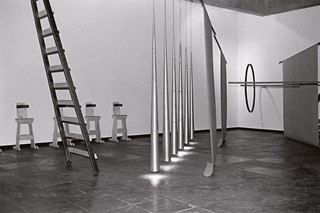 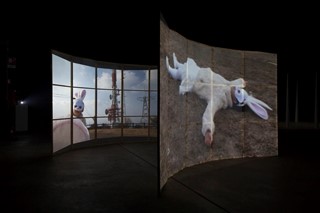 Some artists want their work to be observed, critiqued, or admired; others, would rather it be experienced. With a career spanning over half a century, Joan Jonas has continuously used the full breadth of her creative powers to generate immersive, hypnotic, and singular experiences for her audiences by challenging artistic media and pushing the boundaries of experimentation. Born in New York in 1936, the video and performance art pioneer has had an impact on contemporary art that is hard to overstate.

Jonas’ work runs the gamut of bodily, spatial, and digital perception, fusing a shamanic, ritualistic vision, and a layering technique that are simultaneously reminiscent of surrealism and grounded in the zeitgeist. Originally trained as a sculptor, Jonas quickly began experimenting with performance, video, and props after meeting influential choreographers Trisha Brown and Yvonne Rainer in the 60s. In her large-scale, cross-media installations, a myriad of visual and sonic effects converge to draw, film, video projections, sculpture, movement, and, crucially, the physical presence of the artist herself.

The fragmented, dream-like storytelling of Jonas’ video performances is as infused with mythology and folk-inspired motifs – her 1976 installation “The Juniper Tree” was inspired by Grimm Brothers fairytales – as it is with social commentary – works such as “Reanimation” (2013) or “Stream or River, Flight or Pattern” (2016) allude to the topic of climate change, while her seminal 1972 “Organic Honey” video is an introspective exploration of female identity and sexuality through the eyes of a masked erotic alter-ego. Throughout her prolific career, her revolutionary practice in New York’s downtown art scene transcended barriers and inspired a generation of artist and thinkers. Now, the Tate Modern is presenting the largest retrospective of the groundbreaking artist’s work ever held in the UK as part of its Ten Days, Six Nights programme. To coincide with its launch, we asked Jonas to revisit some of the most meaningful and telling facets of her legacy.

ON HER ARTISTIC TRAJECTORY

“In the late 50s and early 60s, there was no such thing as video or performance art. I went to art school in New York and I was dissatisfied with my work as a sculptor, but I was very lucky to know people who were using performance as art, like Claes Oldenburg, Robert Rauschenberg, and the dancers who worked with them – Yvonne Rainer, Simone Forti, Lucinda Childs – as well as composers like Phil Glass. We were all friends at the time; it was a very small world, very different from the art world today. So I went to many of these happenings; I saw as much as possible. So the minute I saw this work, I thought this would be interesting for me because I wasn’t satisfied with object-making. I was drawn to this alternative form of artistic expression, although generally, I don’t call myself a performance artist. I think of myself as a visual artist who works between media. Performance is one of my basic structures, but it’s also very important to know its relationship to technology, video, and to ideas of perception.”

“My practice is definitely informed by surrealism” – Joan Jonas

ON THE OVERLAP BETWEEN SCULPTURE AND PERFORMANCE

“There’s an expression, ‘expanded film’, which means that a film can be shown outside of a theatre, in a different environment, and can be expanded to be an installation. I think of sculpture a little bit in that way. Sculpture is not just about the object, and that really comes across with minimalism; sculpture was something that was perceived in a certain way, depending on the room that you were in and how you viewed it. The viewer became a part of the artwork itself. And, for me, when I stepped into performance, I was able to work not just with the object, the single object, but also with sound and dimension. I always thought of my performances as existing in a stage set that I had to create and step into, and, in that way, I could invent certain things through that I couldn’t invent otherwise.”

ON THE INFLUENCE OF SURREALISM

“My practice is definitely informed by surrealism. I’ve always been interested in it, its methods, and artists. I wouldn’t call myself a surrealist because I don’t really dwell in the dream world as much as they did, but I think one of my main ideas of structure came from the idea of juxtaposing disparate elements and not having a logical progression in the narrative of my work. The surrealist mark is quite present.”

ON HER LIFE-CHANGING ENCOUNTER WITH JAPANESE NOH THEATRE

“I went to Japan in 1970 and that was the first time I discovered Noh. I was fascinated. It’s an abstract, visual music, and dance theatre. It has a narrative and storytelling, of course, but all of it is about dance, movement, sound, and the use of masks. When I was starting out, as an inexperienced performer I began to work with masks in order to neutralise myself; my personality. I didn’t want to be Joan Jonas, but I wasn’t an actor or a dancer, so the mask enabled me to take on different personas, step onto this stage and not feel exposed, in a way. I relate Noh theatre to the likes of Antonin Artaud, or certain westerners who were very influenced by it for the same reasons. Artaud was very drawn to eastern forms of theatre, as were Yeats and Ezra Pound. I loved Yeats, so it was a natural attraction and crossover.”

ON THE PRESENCE OF ANIMALS IN HER PRACTICE

“In art history, a lot of stories are mythological; often mythology and rituals are connected. I did a lot of research into rituals of other cultures when I began to make performances. I thought of myself as a ritual, in a totally present way. In mythology, there is always the animal helper. There is this very strong presence of animals in art history. I had a dog, and, in a very personal way, my dog at the time entered my work, both directly and indirectly. I always drew my dogs kind of obsessively. In a way, I just allow them to enter into my work organically; I don’t train them. I always thought of my dog as my animal helper.”

The below is a video of “Draw Without Looking”, captured live on 28 February 2013 at Tate Modern